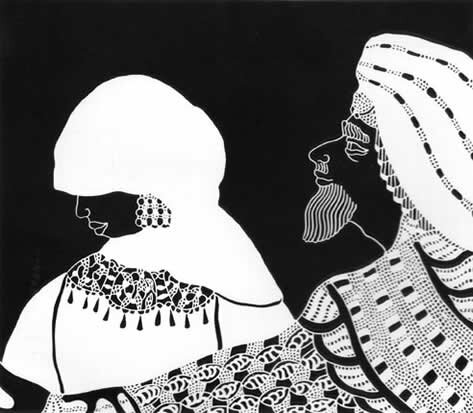 The story of Judah and Tamar is often overlooked, or perhaps I should say it is purposely glossed over because of its questionable content. Many Christians struggle with accepting Tamar as a person who portrays any type of leadership quality, let alone having Christian values. We all tend to get stuck when we think about her actions don’t we? Even though we don’t condone Tamar’s actions, it doesn’t mean that her entire character is in jeopardy. Take King David for example. We tend to remember him as the most righteous man in the Bible. 1 Samuel 13:14 says he was a man after God’s heart, and yet if we read through the rest of 2 Samuel, it’s clear that David isn’t as “righteous” as we make him out to be. He was a sexual predator, he was an adulterer, a murderer… I’ll stop there. I’m not saying this to bash David, not at all. I’m simply making a point that despite how incredibly sinful and numerous questionable decisions he made, we do not paint David in the same way. Tamar may have intentionally done something we view as taboo, but so has David, and we have zero hesitation to point out his good qualities. Why shouldn’t we then give Tamar the same grace?

And that’s the leadership quality I believe that Tamar has. The ability to show and give grace. It’s an elusive quality, not many of us can give grace that freely, but Tamar shows that she is able. If we read the story again in detail, Tamar gives grace to Judah’s entire family multiple times, but it is the grace she gives to Judah directly that changes him. Genesis 38:25 tells us that Tamar didn’t outright embarrass Judah, instead she silently sent a messenger with his belongings, as to not harm Judah’s reputation. Why would she do such a thing? If she pulled out Judah’s staff, cord, and seal then the whole town would have been on her side and she would have complete vindication. Yet she didn’t. She chose to show Judah grace.

The story doesn’t end there, this grace changes Judah. The man that once sold his brother Joseph into slavery, abandoned his family, and refused to uphold his obligations has been transformed. If we look later in Genesis 44, we see that Judah’s brother Joseph has become the Pharaoh’s right hand man. There is a famine in the country and people have come to Joseph to buy grain, including his own brothers. Joseph has been testing his brothers everytime they come to buy food, waiting to see if they’ve changed at all for the better since selling him into slavery. He demands they leave their youngest brother behind with him, and in a surprising moment, Judah steps up and asks Joseph to take him as a substitute instead. It’s clear that Judah is not the same man as he was in Gen 38. Something’s changed him, and it was the grace he received from his daughter-in-law, Tamar.

Tamar didn’t have to show any grace to Judah. In fact, she had every right not to. She could have embarrassed him and made his life difficult for being a jerk, but she didn’t. This is a solid quality that we can learn from and focus on: the ability to give grace to those who we feel are undeserving of it. Jesus did it for us, and he calls us to be his ambassadors to this broken earth. If Tamar can offer grace to those who mistreated and broke promises to her, we also can find the strength in Jesus Christ to do likewise and when we do, we make room for God to transform us and others.

As we reflect on this story, let’s ask ourselves, where in my life do I need grace? Who do I sense God is saying to give more grace to? To receive grace means to be able to give grace in return.

Give to WOW! While You Shop

CHOOSE WOW! as your CHARITY at
Amazon Smile
Giving Assistant