A liminal space—that in-between space of waiting, of not knowing, of presumed inactivity, expected to be short-lived! Most dread that liminal space. I, for one, who likes things organized, leaving nothing to chance, am mortally afraid of such spaces of uncertainty. Much to my unwelcome surprise and a great deal of resentfulness, I found the first twelve years of my ordained ministry defined not by the “rootedness” I hoped for, but by one liminal space after another. My naiveté about the workings of the institutional church with its undercurrents of deep-rooted biases and a misguided sense of western proprietary over “Christianity” took me through the revolving door of interviews, exiting often, as not the “right fit” for a predominantly white and “elite” denomination. Still, God used the short-term calls to “small-dying-churches” and later interim calls to thriving churches to teach me and hopefully the churches I served some profound truths about what it means to follow Jesus into the Church that dares proclaim Him.

Now that I have landed in this place of tenure, as rector of a 317-year-old church, where rootedness is not a hope but the reality, I can feel an uncertainty of a new kind. When I signed yearly contracts with expectations on both sides, it helped me focus on specific tasks even as I longed for a place and a community to finally put down my roots. In those liminal spaces of interim ministry, what Blaise Pascal — 17th century French scientist and philosopher — wrote seemed to ring true, “Somewhere, something incredible is waiting to be known.” That incredible something waiting to be known, as it turned out, included me! I say this not with hubris but with the realization that without the focused presence in those liminal spaces I wouldn’t have known what it means to pay attention to what is around me and who is right in front of me. Today, I realize nothing could have taught me more than those liminal spaces how to shed my infatuation with influence and the grandeur of leadership dancing intimately with numbers. That longing for rootedness, I believe, was more about growing my influence rather than a yearning to see lives transformed, including mine, in the company of the One who seeks our liminal spaces where there are no clear agendas, where He can have a say, and where we are more likely to listen!

Ministering in liminal spaces has taught me that God’s first call in my life is to be open to His project of my transformation. Those transitional places of ministry gave me no right to claim ownership of any vision, nor strategic planning, nor church growth programs, not even community, which gave me a profound understanding of what it means to be in the business of God’s Kingdom. It taught me in no uncertain terms that God alone has claim over the vision of His Kingdom on Earth, that God alone has claim over a person’s life and over a church’s life. It showed me that the only claim I have in ministry is Jesus’ love. It sounds sappy to talk of love being Jesus’ primary call to us, but I now know, genuine love—the Jesus kind, is not just difficult but scary. Just before his crucifixion Jesus said, “I give you a new commandment, that you love one another. Just as I have loved you, you also should love one another. By this everyone will know that you are my disciples…” My hope in this new God-given space after years of navigating liminal spaces is to be known as His disciple. 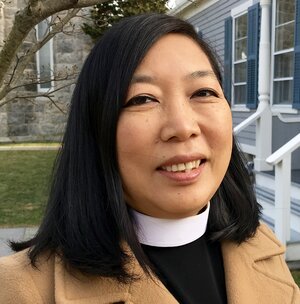 The Rev. Ajung Sojwal immigrated to the USA from India in 1994. Ajung is married to Milind, an ordained minister from India, they have two adult children, one still in college. Ajung was ordained in the Episcopal Diocese of NY in 2006. In March, 2019, she was called to serve as the rector of St. George’s Church, Hempstead, in the Diocese of Long Island. She is passionate about discovering and proclaiming God’s Kingdom on Earth. She is particularly interested in understanding what radical hospitality means for the Church today. She enjoys meeting new people, opening their home for fellowship and home cooked dinners; likes travelling, hiking, reading, writing and being in conversation with people about things that matter in relationships and community.